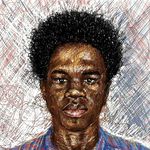 Inspired by culture, BINI® Playing Cards pay homage to the ancient kingdom of Benin and its classical works of art (dated earlier than the 15th century). Each deck comprises of 54 playing cards and features custom court cards and Pip cards.

The challenge I had was presenting Benin art in a fun and contemporary way, something both the young and old could relate and interact with easily.  I felt there needed to be a little shift from the usual ‘Benin Bronzes’ everyone was familiar with.

Playing cards seemed to be one of those things that cut across different age groups (both young and old) and continents.  For me, It was important for the deck to be educational as well as aesthetically appealing.  It had to give the audience (both locals and foreigners who came in contact with the product)  a bit of insight into the Benin art history.

I made a bit of research into certain aspects of Benin art history to have a clear idea of the significance of each iconography, which I would later reference in my project. I started gathering data for the project in 2015 and worked on the design (on and off) between 2015 – 2018.

Amongst other factors, the tuck case design is one of the most important aspects in the design of a deck of cards. It is one of those things that gets people interested in collecting or knowing more about a deck.  So, aesthetics and memorability was a big design factor for me.   I came up with several iterations for the Tuck case before settling with the final design.

When most people think of Benin art, An image that quickly comes to mind is the Festac ’77 mask – the Benin ancestral head.  The final tuck case was modelled after a free-standing Uhumwelao (commemorative head) which serves the purpose of honouring one’s predecessor.

The court cards feature various characters in day to day Benin Court life.  ‘K’ represents the Oba (King), ‘Q’, the Iyoba (Queen mother) and ‘J’ represents the Iyase of Benin (General commander of the Benin army back in the old days).

The Joker card recounts Benin’s victory over the Igala army and the Bird of prophecy in the 16th century. The Aces featured a couple of Iconographies seen in Benin art, each having its unique description.

The pip cards had the numbers 2-10 translated to Benin language and written at the sides of each of the cards.

I believe the initial intent I had for creating the deck has been achieved through people (both old and young) learning a thing or two while having fun at the same time. It’s gotten a couple of positive reviews so far which is quite encouraging. The second edition, maybe.

The final result is very awesome, the near realism kind of wants me to to get an ice-cream :), also the three-dimensional effect just makes your eyes more engaging cos it seems like there’s detail everywhere, beautiful stuff.

First of all, the designer stayed true to his word by ensuring the fundamentals of Benin Culture remained the same and in similar fashion, he also didn’t change the dynamics of ‘regular’ playing cards. It was easy to relate even if I haven’t played the Bini cards before.Now, this is what he unknowingly achieved…Card games generally have benefits, from improving mental health to developing critical thinking skills.  What this means is, I can teach my child Benin History yeah and as well get the benefits of what a regular card game will offer.We have been struggling with indigenous educational methods where we can teach globally required skills but ensure that our indigenous history remains a priority so that we don’t lose it. Several teaching methods can stem from this. Imagine taking the whole Chess game methodology and using Benin cultural elements (or any culture) to teach!

As a design enthusiast; it felt very exciting to read through a design case study that focuses on an aspect of Nigerian culture such as this. The project is very refreshing I must say, in terms of how it infuses ancient Benin culture into playing cards. There are so many significant touchpoints in the design of the cards. From how I see it, it’s easy on the eyes yet very appealing. For something is meant to be handy and fun, the design is simple and pulls the desired attention to the beauty of the Benin culture.Reading through the process and following the mind of the designer was also very beautiful and it probably helped appreciate the whole project even better. Really wish this designer can take on more projects like this and extend to maybe Yoruba/Igbo/Hausa cultures and other representation of our nationality that can be infused into our education and social systems.The way the popular Benin images were represented was quite impressive even though they could come across as scary to some people.Another major pro from the design is the short explanation done. It added a good dose of functionality to the design. Reading through, I didn’t need to worry about ‘who’ or ‘what’ any of the arts on the cards represent. That factor gave a good representation to the culture itself, enlightening whosoever comes in contact with it so effortlessly. In love with it, Kudos!